Her iconic bowls, vases and dishes in black-and-white porcelain featuring variations on the theme of nets and meshes have been celebrated in a number of solo exhibitions such as Everything is black and white in Gallery Nørby, (Copenhagen 2005). The cross-disciplinary duo exhibition 2D into 3D in Officinet (Copenhagen 2009) featured yet another masterly collection of black-and-white silkscreen ornamented porcelain based on photographer Ole Akhøj’s inspired photos of leaves and branches.

In 2012, her trend-setting works in concrete were exhibited in a solo exhibition Concrete on the table in Shop for Table Setting followed by two joint exhibitions with fellow artist Anja M. Bache, Ornamental Play 1 in Galleri Oxholm (2013) and Ornamental Play 2 in Officinet (2014). 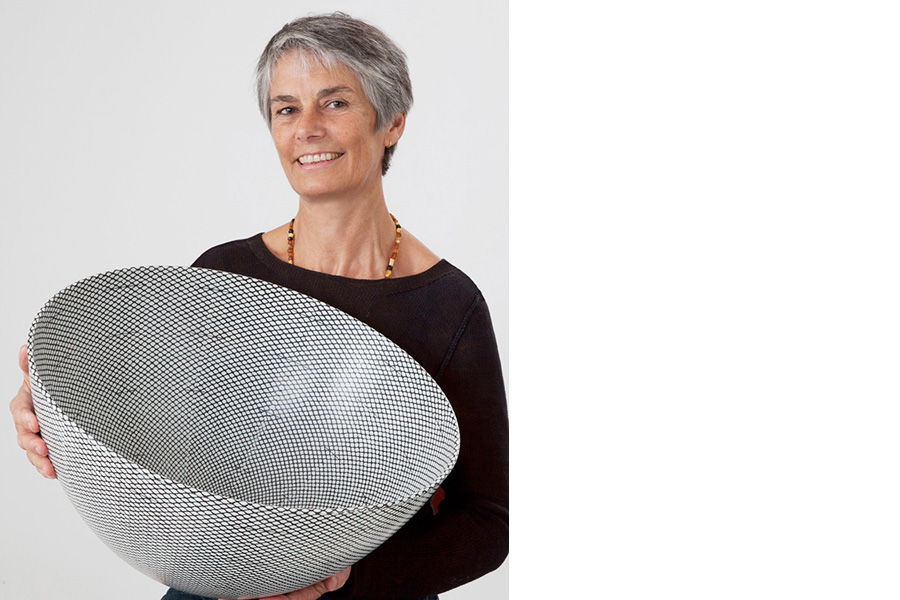 Over the years, the artist participated in several juried group exhibitions such as the Danish Crafts Collection CC09, her collection of bowls “Circles” receiving particular attention when the Best Craftsmanship prize was awarded the Danish group at the International Contemporary Furniture Fair (ICFF) in New York in 2005. Her works were also included in yet another substantial Danish Crafts Collections (2013/14) exhibited at Maison&Objets in Paris as well as in several Danish Artisan and Design Biennials (2007-2009-2011).

In recognition of her talent and skilled craftsmanship, Ane-Katrine von Bülow has received a number of prestigious accolades including the Westerwaldpreis – Ceramics of Europe (Germany 2004), a prize in The International Salt Glaze Competition (Germany 2006) and The Hand Bird (Håndfuglen) from the Danish Arts and Crafts Association in 2010 and again in 2012.

Ane-Katrine von Bülow is a member of the International Academy of Ceramics (IAC) and her works are represented in places like the Cooper Hewitt Smithsonian Design Museum in New York, Designmuseum Danmark in Copenhagen, Höganäs Museum in Sweden, Collection – La Galerie d’Ateliers d’Art de France and Keramikmuseum Westerwald in Germany.